Any sufficiently advanced technology is indistinguishable from magic.
-Profiles of the Future, by Arthur C. Clarke 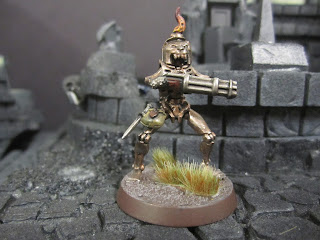 Born from the dreams of madmen, the Automaton clanks and whirs through the streets of Mordheim.  From whence does it come?  Some claim a mad dwarf built it, then was slain by it in turn.  Some say it is a statue come to life.  Some say it is a manifestation of lunatic gods.  Some say it is yet another traveler from another realm.  None have had time to ask when confronted with the spinning of its deadly black-powder gun.

The Automaton's starting bid is 40 GC.

Skills: The Automaton may choose from Shooting or Academic skills whenever he gains an advance.

SPECIAL RULES
Repeater Handgun: This weapon counts as a handgun, but may fire each turn without reloading.  The Automaton may expend a point of Presence to fire D3 shots instead, but will need a turn to reload.

Metal Hide: The Automaton has a 5+ armor save.

Metal Limbs: The Automaton does not require weapons in hand to hand and suffers no penalties for fighting without them.

LOYALTY SKILLS
If The Automaton's player completes his loyalty scenario, it gains the below skill.

Bulletstorm: When opting to fire multiple shots, the Automaton fires D6 instead of D3 times. 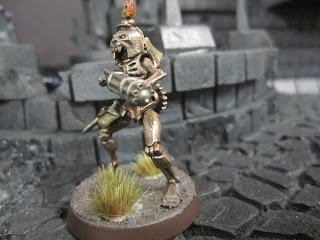 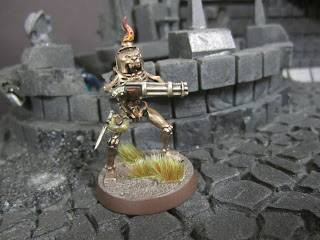 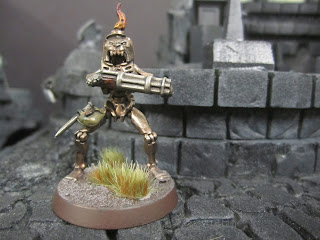