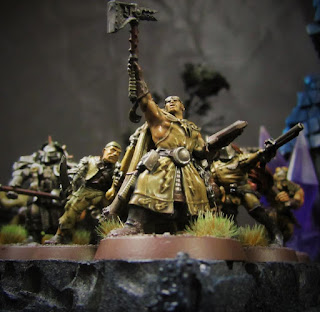 With a hatred born of righteous fury, Magnus the Pious stared down upon the nightmare expanse of sagging hovels, crooked towers, fuming miasma and shattered streets - the wretched place fools called The City of the Damned.  Mordheim.

The blood of Asavar Kul - the so-called Everchosen - still befouled Magnus' hammer.  He had chosen not to clean it - that its dreary state might remind him always of the threat of Chaos - lurking just beneath the surface of all reality; and, perhaps, all dreams.

Mordheim.  A boil once lanced by Sigmar's righteous comet, now become a festering wound - worse, and more poisonous than ever before.  Magnus steeled his heart.  He would cauterize the rotten flesh with holy fire.  A final task to accomplish before uniting the Empire once and for all.

He raised his hammer.  The army at his back screamed their war cry.  "It is their gods that failed them!" Magnus called, "Our God is always with us!"

He took a step forward onto the deformed cobblestone.  For a moment, something checked him.  As though the patch laid bare before him was not the one expected, but a darker road - as though something beheld in a dream.  Magnus shook it off.  Sigmar was with him.  The squirming, loathsome denizens of the city were as nothing compared to the Chaos warriors he had defeated in the Great War.  One last step on the path - one last step before a united Empire would bring, at last, peace to the Old World.

Magnus descended upon Mordheim as a fiery comet, his army surging behind.  He beheld the slinking shadows of the city beginning to congeal.  A foulness coalesced to oppose him in a Great Rebellion against sanity, against the light.

In this scenario, Magnus the Pious marches upon Mordheim to raze it to the ground - ending the city once and for all.  But this time, history may be different!  On one side, Magnus' Holy Army: a Witch Hunters Warband along with an additional models representing Magnus' and his forces.  On the other side, The Great Rebellion: a Carnival of Chaos Warband, a Possessed Warband and a twisted Averlanders Warband.

The game was played on a 6' x 4' table crammed with terrain (created by the awesome Blueforge Studios).  Magnus' Holy Army deployed first within 8" of one of the long edges.  The Great Rebellion would get the first turn, moving onto the table from the opposite edge.

Enraged by their failure to stop Magnus during the Great War Against Chaos, the Dark Gods have sent warp energy surging through the Great Rebellion, imbuing them with impossible strength.  This was represented by the following rules:

Daemonic Strength
- Whenever a hero or daemon (excluding nurglings) inflicts a critical hit on a henchman, the henchman is ripped to pieces and his head torn off!  The henchman immediately goes out of action.  Your model may hurl the decapitated head at any enemy model within 6", automatically inflicting a S3 hit.

- Whenever a monster or giant monster inflicts a critical hit on a henchman, the henchman's entire corpse is thrown through the air!  The henchman goes out of action, and is hurled through the air in the same way as a slam attack.

Dark Gods' Favor
In addition, the Dark Gods were determined to hurl every last terror they could against Magnus in a desperate, last-ditch effort to stop him.  To represent this, I had prepared a series of six cards each with a special effect on them.  These ranged from increased magical power, to powerful daemonic allies.  The three players controlling the Great Rebellion had no idea what the cards contained.  Each turn, starting with the second, they were allowed to draw two and pick one, with the remaining one being returned to the pile.  In some instances, henchmen could be sacrificed to make the card's effects permanent.  For this battle report, I will indicate when each card was played and its effects. 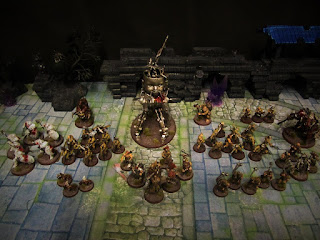 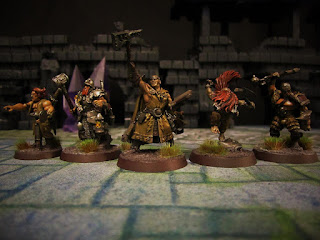 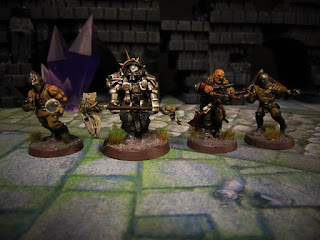 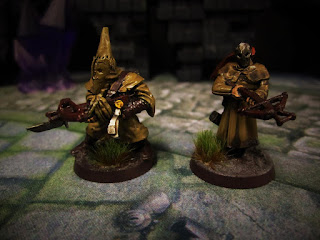 The Hoodsman: Witch Hunter with crossbow. 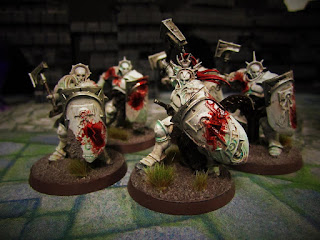 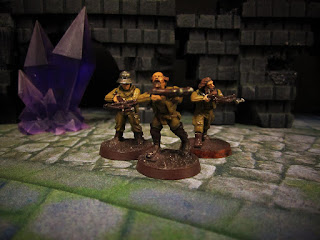 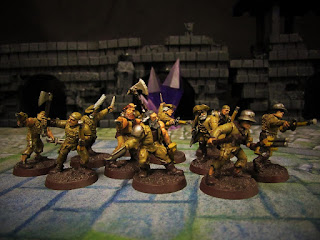 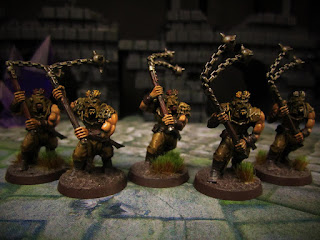 The Lunatics: 5 x Flagellants with flails. 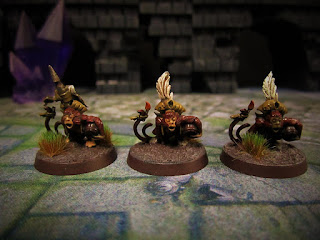 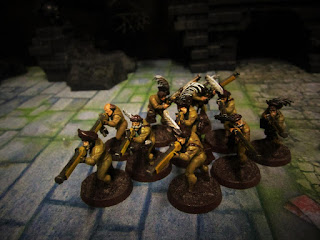 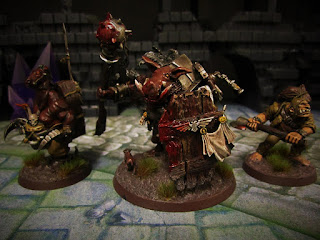 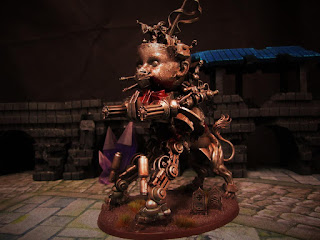 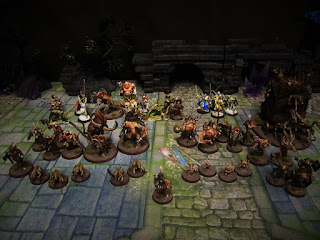 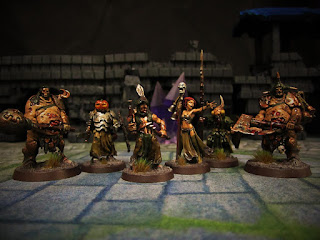 Carnival of Chaos
(From left to right)

Hawke: Sorceress with staff.  Knows the spells: Fires of U'Zhul, Sword of Rezhebel.

The Fly: Mutant with cloud of flies mutation, spear, shield. 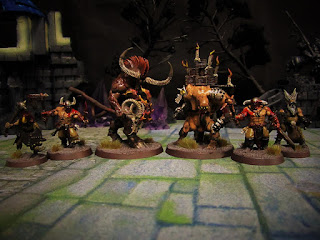 The Possessed
(From left to right)

The Beast: Minotaur with Tzeentch Staff.  Knows the spell: Luck of Shemtek. 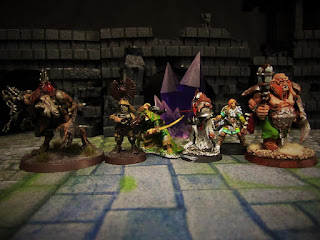 Fallen Averlanders
(From left to right) 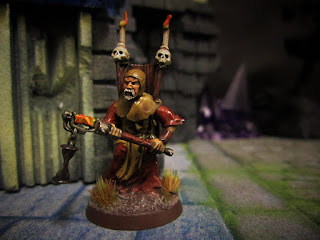 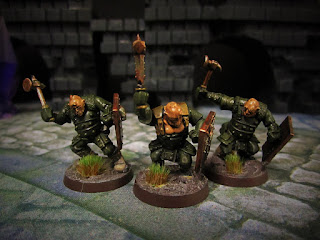 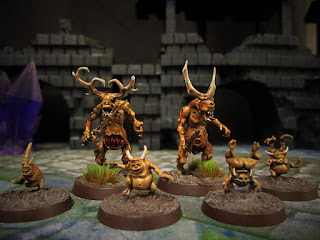 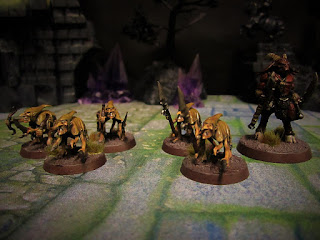 (From left to right)
The Path: 3 x Brethren with bows.

The Way: 2 x Brethren with spears. 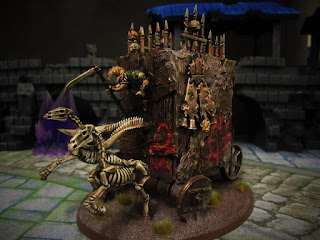 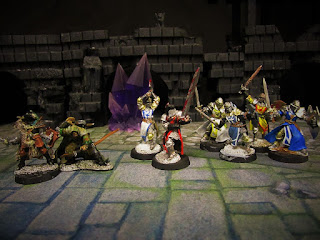 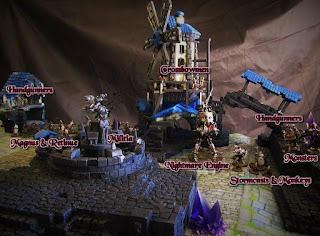 Magnus' Holy Army deployed all available warriors with missile weapons with solid vantage points.  On the lower levels, Magnus and a group of heroes took the West flank while the monsters and the Nightmare Engine took the East flank.  Holding the center was the large militia group led by Warrior Priest Kurt von Skull.  A classic pincer maneuver. 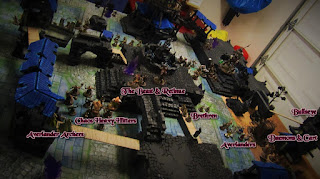 Turn 1 and the Great Rebellion surges onto the battlefield - eager to get to grips with Magnus.  The Averlander Archers and the Tilean Marksman took high vantage points.  On the West flank, The Great Hoodoo charged towards Magnus with a large retinue of heavy-hitting chaos heroes, including: both brutes, both reavers, three brethren and, strangely enough, the Averlander squire Dingwall - which was to prove fortuitous in the coming turns...

On the East flank the daemons and the plague cart rumbled forward backed up by virtually all the fallen Averlanders and Sad Face, the Possessed.

Thundering across the center bridge came The Beast, the Sergeant, the Professor and the Possessed henchmen.

Battle was joined - the Great Rebellion was finally at hand.