When loss has won, may it be
It's you I'm madly fighting for
When kingdom comes, may it be
We walk right through that open door
-Now that we're Dead, by Metallica 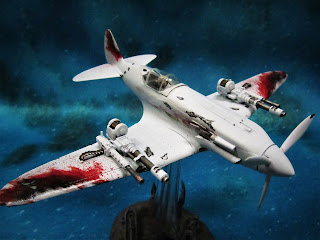 As the War Against the Wizard raged into its fourth year, a new enemy emerged which changed everything.  It struck as a thunderbolt.  Old enemies put aside their conflict and turned to face this new, and unspeakably horrific foe.
Abandoned were the old, slow, inept warmachines and into the blazing cauldron of flaming carnage plunged new engines of death.  The Loamhedge Kingdom pushed a new type of fighter to the front lines, one which was to become so iconic and so linked to the conflict that the war was named after it: Angelwing.
Read more »
Posted by Millenium_king at 12:12 AM No comments:

The force of suns had waned beyond recall.
Chaos was re-established over all,
Where lifeless atoms through forgetful deeps
Fled unrelated, cold, immusical.
-The Abyss Triumphant, by Clark Ashton Smith 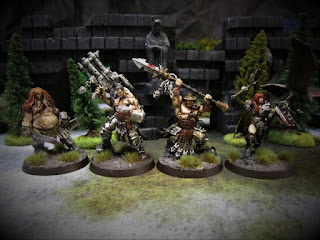 THE PLANET OF YOH-VOMBIS IS A WORLD GIVEN OVER ENTIRELY TO KHORNE.


Read more »
Posted by Millenium_king at 1:50 PM No comments:

The Dark Eidolon: A New Campaign

To look up into the night's sky
To see the stars [have] changed
To know a thousand years or more have passed, and I am still the same
This mountain hollow that keeps me in a [suffocating] embrace
A prison and a safe haven, it's always been this way
-Apex, by Unleash the Archers

Tides of bitumen colored clouds surged, then receded over the horizon.  An undulating cycle which belonged to no season save the cruelest autumn.  Hateful, merciless skies.  A ziggurat of shale shuddered beneath the oncoming wind; its uppermost stages shook the hardest, yet shook beneath no wind, but beneath the footsteps of the great Oracle Mulmak.


Read more »
Posted by Millenium_king at 5:13 PM No comments:

To your Brethren in the Dark: Character Archetypes

Into the night
My long suffering friend
We'll be reborn again
Right here where everything ends.
-Phoenix, by Satyricon

The nightmare of Fiddler's Green must be ended.  A story of long ago where few stood against many.  Four warriors stood alone against thousands.  Whether in life, or in death, their light will be passed to all of those who follow in their footsteps.

To Your Brethren in the Dark: A New Campaign

During the black tide which ebbs lowest betwixt night and nether night, your grandfather clock peals a haunted thirteen chimes.  The New Year races over the horizon upon black wings.  In the shivering realms of farthest North, the witchmen are unfurling their burning standards to march under the banner of Asavar Kul, the Everchosen.  You have heard rumors of a man who proclaims himself the chosen of Sigmar, a man who professes his holiness even as he leads thousands to certain death.  Holiness, of what benefit is it?  How can purity be more desirable than that which all men truly crave: wealth, power.
You light a candle and set it in the bare window casement.  The bullseye panes of glass behind it ripple in the faint glow it casts.  Until tonight, you had been prepared to throw your lot in with the stream of brigands, highwaymen and thieves making the sullen journey to Mordheim.  Then the courier arrived - bringing a letter from Elector Count Fitzpatrick himself.  You clutch the parchment in your pocket.  Now, everything has changed.
A wind sets the windowpanes rattling.  It carries the faint hint of blood.  War is coming.  Whether by the twisting flames of Chaos or the brilliant fire of Sigmar, the land will burn.  Only those with resources to match that of kings will survive.  You extinguish the candle.  The Light of Sigmar, the Light of Chaos - let them blaze against one another in the high inferno of endless battle.  What does it matter?  You've always preferred the dark.


Read more »
Posted by Millenium_king at 8:26 PM No comments:

Driving a race car is like dancing with a chain saw.
-Cale Yarborough 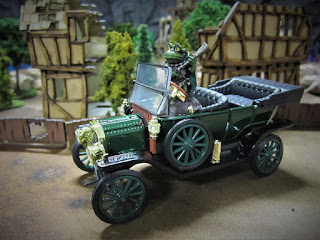 In preparation for Million-Colored Sun, we are presenting simple rules for vehicles.  If these seem similar to those from Gorkamorka - then that is sheer coincidence.


Read more »
Posted by Millenium_king at 9:48 AM No comments:

To be a good fighter pilot, there is one prime requisite - think fast, and act faster.
-Major John T. Godfrey, USAAF 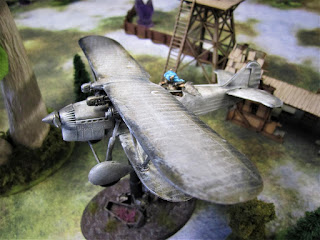 The Starfire Cr.32 Biplane was typical of the fighters utilized by the Loamhedge Renegades: compact, robust, highly maneuverable- and heavily armed.  They were resilient and forgiving for new pilots, but could still be deadly in the hands of an ace.

Read more »
Posted by Millenium_king at 9:37 PM No comments: