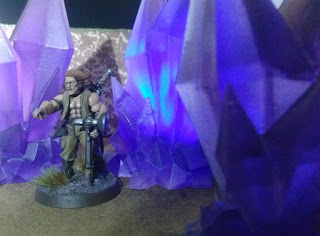 For beauty is nothing but the beginning of terror which we are barely able to endure and are awed because it serenely disdains to annihilate us.
Each single angel is terrifying.
-Duino Elegies: The First Elegy, by Rainer Maria Rilke
Translated by Albert Ernest Flemming

Greetings!  After many long years of absence, I have returned in force to the dark, abyssal labyrinth that is Mordheim - City of the Damned.  I am Games Master for my group's new Serene Annihilation Campaign.  This is a Mordheim campaign like nothing before.  It has a few changes to the basic rules, a whole warped background and an utter disdain for competition.  Serene Annihilation is about the story, and about the madness which results from broadening Mordheim's themes into other realms.  Join me as I explore the background to this miserable tale of woe, suffering and hideous dreams.  Join me in the radiant halls of the Palace of Dreams where men come face-to-face with their true selves - and realize what a nightmare such a thing is.


Deep within the tangled heart of a black forest a Beastman Chieftain has visions sent by no Chaos god.  Atop the wild domed hills of Averland, a mercenary Captain's sleep remains fitful.  Along the lonesome roads of the back-country, a carnival master dares not look into his crystal ball for fear of what he might behold again.  In the shadow of Sigmar's Cathedral, a witch hunter clutches his hammer sigil but finds it will not banish the endless whispers.

All four diverse individuals have been having the same dreams: go to the city of the damned.  Journey to Mordheim.

At times, they glimpse a five-pointed star - or perhaps it is an eye?  Each point set with a lock.  Each lock, bereft of a key.  Something waits beyond the portal.  Something rears up into the eternal midnight of Mordheim's sky.  A blacker black than the night.  A spire reaching into dismal eternities:  the Palace of Dreams.

All four gather their followers and head for the city.  But once inside, they find that the nightmare has swallowed them whole: no matter which way they turn, no matter what alley they head down, no matter what hill outside the city they crest - they always find themselves back in Mordheim.  Back in the City of the Damned.  The Great Beast has devoured them.  It seems that the dreams are the key - but will they ever solve their enigma and escape?

Worse, the clock is ticking.  Halloween is coming.  And, somewhere, far beyond the city - a young man named Magnus is gathering his followers...

The Serene Annihilation Campaign focuses on four players, playing the following warbands: Averlanders, Beastmen, Carnival of Chaos and Witch Hunters.  I play the Witch Hunters, but also GM the campaign.  This is a sort of "mixed" role where despite participating in the campaign, I also run it.  In order to keep things fair, I am not allowed to make any of the major campaign choices and am excluded from participating in most of the special scenarios.  The upshoot of this is that I get to play as all the "boss monsters" and other nastiness that arise.

The campaign is played as a normal Mordheim campaign, but after a set number of games, special "story events" will occur.  There is no real "winner" for this campaign - only a goal which all players share: to escape the city.  In order to do this, five "boss monsters" must be faced and defeated.
The campaign goes in sequence from player to player.  The player whose campaign turn it is can choose to challenge another player, to play a multi-player game or to challenge the current boss monster (if available).

Along the way, the players will combat various antagonists (not all who are what they seem...), fight each other, form alliances, break alliances and learn more of the horrible truth behind the Palace of Dreams.

I will break all the rules in the name of fun for this campaign.  Expect the unexpected.